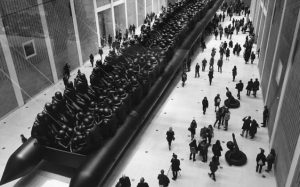 Ai Weiwei (born 1957) is one of the most talked-about contemporary artists. His art is always socially and politically involved, and he isn’t afraid to make highly controversial statements. Weiwei began his career as an artist studying animation in Beijing. He moved to the US to study art in the 1980’s, and lived there until 1993, when he relocated back to China. In China his art works would systematically comment and criticise the government, and he was also writing socially critical blog posts to Sina Weibo, China’s biggest internet platform. Unsurprisingly the Chinese authorities didn’t take his criticism lightly, and consequently he was arrested in 2011. He was held accused of tax fraud, but released after several months when no evidence was found. However, he couldn’t leave the country before 2015, when he relocated to Berlin, Germany.

Ai Weiwei’s artistic style can be called conceptual art. He works on varying media, including videos, sound recordings, performances, and photography. His art is socially and politically engaged, typically commenting on contemporary events, politics and social structures. One of his most memorable artistic performances was Dropping a Han Dynasty Urn (1995), which consisted of him smashing a valuable 2000 years old ceremonial urn from the Han dynasty period. Han dynasty is considered to be the era in China’s history which made China a great empire. As a commentary on his destroying the urn Weiwei stated: “General Mao used to tell us that we can only build a new world if we destroy the old one.” The work is an important commentary on some of the contradictions of contemporary China. On the one hand China considers itself to be a continuation of the Han dynasty, and still revers its ancient traditions and artworks. But at the same time it is officially a communist country, whose society is fundamentally marked by the socialist ideology, and its history in the 20th Century, which included Mao’s Cultural Revolution.